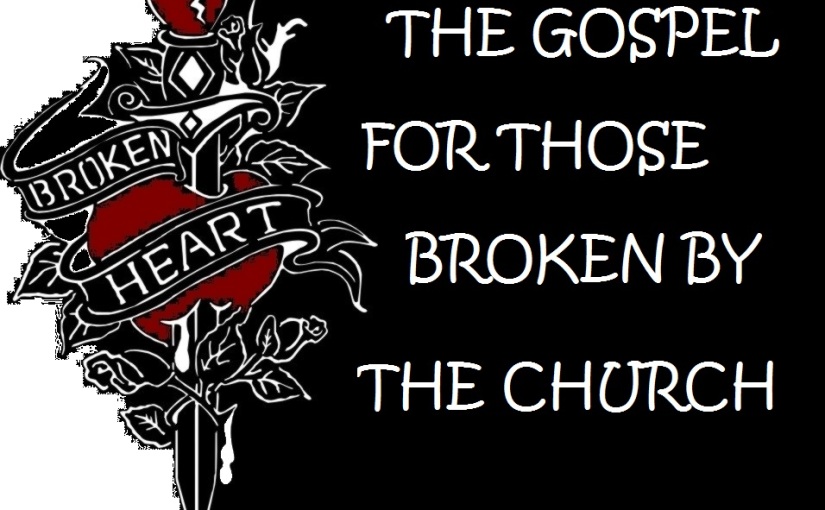 The Gospel for Those Broken by the Church

Secondly, let’s talk about those alumni of Christianity who are not sad but “mad.”

It is not all that uncommon. I find that these “angry ones” have usually not switched from Christianity to another religion. Nor have I found that they have switched from one Christian denomination to another. Instead, I find that they are angry at any and all religions and anyone who represents any religious position — but especially Christianity. And that is natural. After all, it was Christianity, as they see it, that “used them up and threw them away.” I suppose the most visible examples would be men like the late comedian Sam Kinison and ex-Roman Catholic George Carlin. You may (and probably do) know better contemporary examples than I know. All of us are in the vicinity of people like this at one time or another, maybe know a few of them as friends, or have at least met one or two in passing. Why do I say that? Because such people are, as I said, not all that uncommon these days.

Now I certainly can’t this evening exhaust the dynamic involved in such people (again, I’m no clinical psychologist). But I still think a lot of the “mad alumni” also often have a nameable history, just as the “sad alumni” have one.

People like this often speak as if Christianity “baited and switched” them — just like a used car salesman “baits and switches” a young couple at a car lot.

Christians promised them a new life in Christ in such a way that it was going to be a life of victory, God’s designed route to earthly happiness, a new, divine power that would solve the problems so obsessing them. Then, when the promises didn’t seem to work the way they were supposed to, the church put it back on these believers that they were somehow “not doing it right.”

But again, Christianity seemed “not to deliver on its promises.” It “didn’t work.” As they see it, they “gave it every shot” and Christianity “failed to deliver.” And then, to boot, they were called guilty “for not doing it right!” These people feel not just disappointed; they feel betrayed, “conned.” And they are deeply angry about it.

Or take another example: those who heard much of Christ and His saving blood and cross in an evangelistic meeting, became Christians, and then heard very little of that wonderful message in the week-by-week pulpit ministry of their congregation. Instead, they heard recipes as to how to conquer sin — over and over and over. These people also often “give up on Christianity.” And they are angry about it! Really angry. And I don’t blame them, really. Nor should you. The church has an obligation to preach the Gospel to these people on a weekly basis. And deep down, they somehow know that. But if that isn’t what happens, they react. I would, too! After all, what does the church have for a man, a woman, a child other than Christ & His work on their behalf? Not much! Not compared to the Gospel of Christ preached as crucified for them and for their sin, Christ risen from the dead for their justification. Not compared to being absolved, not compared to eating the body of Christ given into death for their sin and drinking the blood of Christ shed for their sin.

Is there anything we can do that is of genuine help to such angry “alumni” of Christianity?

I think so. And the answer I’m about to give you comes right from a guy close to one of those angry ones. From whom? From Sam Kinison’s brother, Bill! How so?

One night I happened to be watching a “60-minutes” interview with Bill Kinison.

After Sam was in an auto accident on a lonely highway near Las Vegas, he lay dying. Bill was cradling Sam’s head in his arms as Sam died. Some time later, the interviewer asked Bill about Sam’s hatred of Christianity. And Bill looked at the interviewer and said, “What? You think Sam was not a Christian believer? You’re wrong! Sam died as a believer in Jesus Christ. You’ll definitely see Sam in heaven!  Sam never was angry with Jesus. He was angry at the church!” And I jumped out of my chair and yelled, “That’s it! There it is! There is the answer – and from Sam Kinison’s brother!”

We can respond to the angry and say something like, “Oh, oh, oh, I see! You’re not angry at Jesus Christ. You’re angry at the church!” “Boy oh boy, join the club! So am I! And so are a whole bunch of other Christians!” [Here, if we had time, I would digress on how Christians angry with Christ will be saved by His cross, too. But this is not the time for that.]

Now this response takes more than a few minutes of thought on our part.

That is, “Am I ready to say such a thing?” And that’s not an easy question. For many of us—especially for us clergy—this question can be really difficult. Why? Because there is a predictable psychological profile of the clergy, including our closer relationship with our mothers, but not with our fathers. For most of us pastors, the link between Jesus and the church (a mother symbol) is so tight, so identical, that to be angry with mother church is the same as rejecting Jesus! It is not. But I’m recommending, at least in conversation with “the angry”—that we, all of us—identify with the anger of these people at the church, that we say, “Well, of course you are angry! With what it did to you? It would be insane not to be angry at it! I just misunderstood. I thought you had dismissed Christ, were rejecting His death for your sin. Thanks for clarifying.”

Born in Atlanta, Georgia. Living in Atlanta, GA. Well kinda, in a city NE of Atlanta in Metro Atlanta called Sugar Hill, but everyone close to ITP just says they are from Atlanta. Marine Veteran. Simul Iustus et Peccator. The verse that could best sum my life...Galatians 2:20...I am blown away by the Grace of God. What Jesus did for me just leaves me in awe and in thanksgiving...It was all Him...and the peace that comes with that is liberating...now I am free to lose everything because I have everything in Christ. View all posts by Zachary James Cole