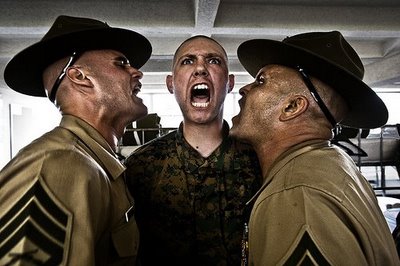 We bolted off our spot on line (our designated standing spot) next to our racks (bed) and ran to the front of the squad bay where we lived for 3 months.

The quarter deck was a small area that was separated from the squad bay and was in front of where the Drill Instructor slept which was referred to as the Drill Instructors “house” which was a little small room sectioned off from the rest of the bay with an entrance and a glass window facing our racks.  Inside this room is where the D.I.s would spend their time when they were not instructing us which was basically after lights out.  They had a rack inside the room and everything.  Right across from the D.I.s house was a section of space that separated the house from the head and the rest of the squad bay.  It was large enough to fit about eight recruits…comfortably.

It was also where the Senior Drill Instructor stayed when he was on deck.  Getting “Quarter Decked” or “smoked” was when you had to do rapid exercises like run in place (not jog in place), push-ups, crunches, side-straddle hops, mountain climbers, Smurf jacks and all sorts of other rapid exercises without mercy or any end in sight.  The D.I. would simply say one word commands to begin a different exercise that had to be executed immediately.  “Run” meant to run in place, “push” meant to do push-ups, “climb” meant to do mountain climbers.  After the D.I. would yell “PUSH” we would have to yell back “PUSH AYE SIR” “CLIMB” “CLIMB AYE SIR” “RUN” “RUN AYE SIR”.  When the D.I. yelled “I can’t hear you fat nasties!” it was his way of letting us know that he wanted us to yell over and over again “pain, discipline, pain, discipline, pain discipline”.  Next would come the taunting that was forever present from the D.I. He would belt out; “Discipline is?” And we would squeak out, wheeze out, yell out; “Sir! Discipline is, instant willingness and obedience to all orders sir!”

The Senior Drill Instructor was essentially your “Daddy.”  He trained, supported, yes even disciplined (and when he did it was the worst) made sure you had mail, chow and had Senior Drill Instructor Square Away Time which basically was a time to read any permitted reading material that we might have had (Bibles, Marine Corps knowledge), write letters, receive letters and ask questions respectfully from the Senior Drill Instructor when he had the floor which usually consisted of three stacked recruit foot lockers functioning like a pulpit where he delivered letters to recruits.  He was loved and feared out of reverence for his power.  He had complete authority over the Kill and Drill hats.  So if the Senior Drill Instructor chose to come out of his office while you were being smoked and yelled “STOP” the recruits knew that they had to immediately stop what they were doing, come to attention and yell at the top of their lungs “STOP AYE SIR, GOOD EVENING SIR!!” (morning, afternoon…whatever time of the day it was).

If the Senior DI was satisfied or chose to excuse the recruits back to their spot on line or in their racks the recruits were free from the other Drill Instructors and could leave the quarter deck to rest from the abuse (the only time you could really rest at boot camp was when you were asleep but that is outside of this illustration I am trying to make).

The point is that the Law has us on the Quarter Deck with the sole purpose to kill us.  Kill Kill Kill the recruit.  Pop his heart, make him drop.  Yet Christ and his finished work stepped out of that empty tomb to yell “STOP!!” To an exhausted and worn out world full of worn out nasty recruits…err…nasty sinners.

You see, it is finished.  Christ has died on “the Quarter Deck” for us.  The discipline that we deserved in being smoked, Christ was smoked in our place.  So our need to be smoked is no longer in play.

Yet at the same time Christ rose and now proclaims to those who know His voice to STOP.

Because the just wrath for the breaking of God’s holy Law has already been satisfied on the Quarter Deck of Christ’s Cross.

When the Law yells “push” the Gospel yells “Rest.”

So to you I say, that in the perfect and completed work and substitutionary life of Christ, you can finally rest.

You can finally Stop the Smurf Jacks.

There is therefore now no condemnation for those in Christ Jesus. Romans 8:1 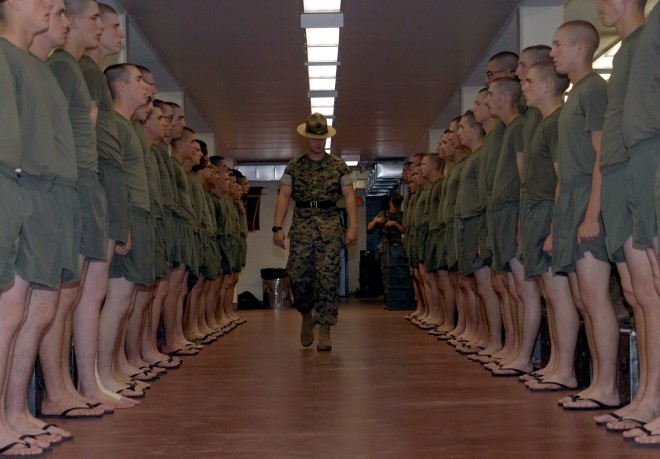 Born in Atlanta, Georgia. Living in Atlanta, GA. Well kinda, in a city NE of Atlanta in Metro Atlanta called Sugar Hill, but everyone close to ITP just says they are from Atlanta. Marine Veteran. Simul Iustus et Peccator. The verse that could best sum my life...Galatians 2:20...I am blown away by the Grace of God. What Jesus did for me just leaves me in awe and in thanksgiving...It was all Him...and the peace that comes with that is liberating...now I am free to lose everything because I have everything in Christ. View all posts by Zachary James Cole